Day trip to the Oltrepò pavese area: in search of beauty

In the Val di Nizza, passing through scenes of mountains, forests and large meadows, the thousand-year old Hermitage of Sant’Alberto di Butrio is reached. Founded by this saint at the beginning of the 11th century, it is made up of buildings dedicated to both religious devotion and monastic life. In the churches of the complex are various frescoes in a Gothic style tinged with Byzantine hints. The hermitage, which houses the mortal remains of St. Alberto, went through alternating periods of splendor and decay. In 1900, it was entrusted to a parish priest and Don Orione who repopulated it with members of the congregation that he had founded: Hermits of Divine Providence. The panoramic view from the hermitage is splendid.

Varzi, in the center of the Valle Staffora, is the capital of the Oltrepò montano area. Positioned on the ancient salt route, it boasts interesting historical monuments as witnesses to its erstwhile importance (parochial church, church of the Cappucines, Malaspina Castle, Giacobone Mansion, …). The area crosses the borders of four provinces (Alessandria, Genova, Pavia, Piacenza) that are culturally homogenous and are characterized by similar customs and costumes including an important repertoire of music and very old dances. The principal instrument of this area is the “Appenine pipe” that, accompanied by an accordian (and, in the past, an Appenine bagpipe), guides the dances and animates the festivals.

After tasting some famous local specialities and eating lunch, passing through an interesting countryside takes us to Zavattarello, a burg in which the historic center still presents characteristic stone buildings with decorated portals. Not to be missed are its 17th century parish church with its big 17th century altarpiece and the Oratory of St. Roch with a late Baroque altarpiece. The town is dominated by the impressive bulk of the castle, property of the Dal Verme nobles from the 14th to the 20th centuries. It is an admirable example of military architecture, never conquered given its sure strategic position. It once was the seat of one of the principal schools of European warfare. The panorama of the surrounding valleys from the castle’s terrace and tower is spectacular. In 1975, the Dal Verme heirs donated the castle to the city. Since 2003, the rooms of the castle host collections of contemporary art works.

Day trip (in Italian) to the Hermitage of Sant’Alberto di Butrio, to the little city of Varzi and to the burg of Zavattarello, Thursday, September 26, 2019
Cultural assistant: Rosa Maria Bruni Fossati
BUS DEPARTURE WHEN AND WHERE: 7:45 A.M., outside of the Pagano metrò station
BUS RETURN WHEN AND WHERE: ca. 7:30 P.M., Pagano metrò station
Fee: €110.00 (includes tickets, bus trip, lunch)
It is obligatory to confirm one’s participation and pay the fee by the 16th of September.

Events may be cancelled if a minimum number of participants is not reached.

Events are open to Friends of the Bagatti Valsecchi Museum Association in good standing, or to its active service volunteers at the museum.

For more information about the event or about joining the association, contact: 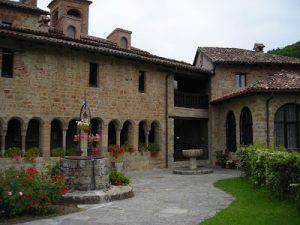