“Let the reader immagine the courtyard of the plague hospital, populated by sixteen thousand plague victims; that completely crowded space, with huts and hovels, with carriages, with people; those interminable perspectives of porticoes, on the left and on the right, full, overflowing with a confusion of those languishing or dead, on sacks or on hay; […] and here and there, a to-ing and fro-ing, a pausing, a running, a bowing, a getting up of patients, of the frenetic, of servants.” (Chapter 35, trans. ad hoc: S. Meyer)

In this way, Manzoni introduces Milan’s plague hospital, called The Lazzaretto (named perhaps after the biblical Lazarus, supposedly a plague victim, or the sponsor or the architect, both of whose first names was Lazarus). In the first quarter of the 17th century, the time of the story, the plague hospital was still outside the city walls in a bid to keep the deadly disease out.

Unfortunately, of the plague hospital complex built in the late 15th – early 16th century there remains very little. A snippet of a perimeter wall with rooms, now otherwise occupied, and the central chapel, once open so that all the sick could follow Mass without having to move, but enclosed in the late 16th century, and just recently restored in 2018.

Participation fee for Friends of the Bagatti Valsecchi Museum Association: €22.00 (non-members may join the association to participate in the event)
September 27: Deadline to confirm one’s place by paying the fees

Events may be cancelled if the minimum number of participants hasn’t been reached.

It’s easy and inexpensive to become an annual member of the museum, and to enjoy all the great benefits, which just get better and better, as you increase your membership level. Check it out! 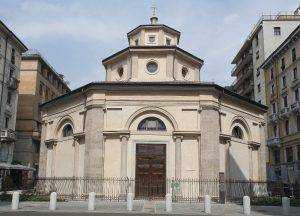